Anger Grows in Hong Kong Over Shooting of Teenage

The shooting of a student protester by the police threatens to further inflame a protest movement that paralyzed the city on Tuesday with spasms of violence.

Raw anger was building in Hong Kong on Wednesday over the shooting of a teenage demonstrator a day earlier, the first such incident since antigovernment demonstrations began in the territory nearly four months ago.

The shooting of the teenager came on a day of intense clashes across Hong Kong between protesters and the police, and hours after China’s top leader, Xi Jinping, presided over a carefully choreographed military parade in Beijing to celebrate 70 years of Communist rule. 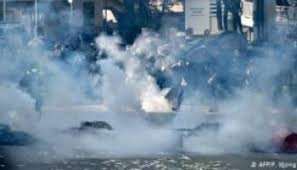 The question now is whether the shooting will further incite a protest movement that was already seething with grievances, and which has been driven by young people who see the city’s pro-Beijing leaders as illegitimate.

In an early sign of anger over the shooting, a Wednesday morning meeting between administrators at the teenager’s high school and more than 100 of its alumni quickly devolved into a bitter confrontation. Many of the former students cried, shouted questions and asked why the administrators had not condemned the police officer who shot the student.

“Can you see how many people are crying here?” one woman pleaded.

But others suggested the school take action against the student for his conduct in the protests, including Leung Chun-ying, Hong Kong’s former chief executive.

The Hong Kong Police Force said on Tuesday evening that the protester was an 18-year-old who had been shot in the left shoulder, and that he was conscious as he was taken to the hospital for surgery.

Left, a protester in Hong Kong on Tuesday seen minutes before he was shot by a police officer. Right, the same protester just after being shot.CreditJasmine Leung/Agence France-Presse — Getty Images; The Hong Kong Polytechnic University Students’ Union

In a video circulating online that appears to show the shooting, the protester is first seen joining a mob of black-clad people who chase a riot officer and tackle him to the ground. They kick him and beat him with what appear to be pipes. 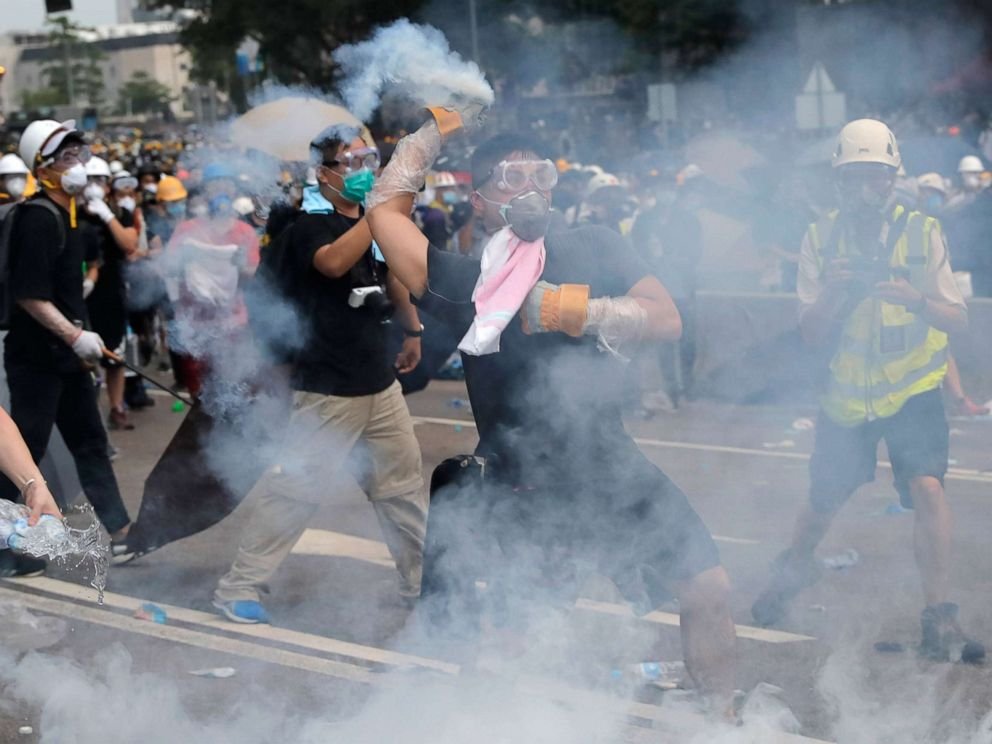 Hours after the shooting, the Hong Kong police commissioner, Stephen Lo, said the officer who shot the protester had acted in a “legal and reasonable” manner, having given a verbal warning before opening fire.

The officer had been assaulted at close quarters, Mr. Lo said, and had no other choice but to shoot. “The range was not determined by the police officer, but by the perpetrator,” he said.

But the Hong Kong Public Doctors’ Association, which represents doctors working in public hospitals and medical departments at the University of Hong Kong, condemned the officer on Tuesday for not using a less powerful weapon, such as a rifle that shoots beanbag rounds, to subdue the protester.

115 Days of Hong Kong Protests. How Did We Get Here?

The protests started as peaceful marches and rallies against an unpopular bill. Then came dozens of rounds of tear gas and a government that refused to back down.

In a statement on Wednesday morning, the protester’s high school, Tsuen Wan Public Ho Chuen Yiu Memorial College, said that faculty members and the student body “all feel very sad and worried” about the shooting. The school’s administration had opened a crisis management unit that includes psychologists and social workers to help students cope, the statement said.

Mr. Lo, the police commissioner, told reporters at an overnight news conference that the police had arrested the protester who was shot, but that the force would decide later whether to press charges. At the meeting with the alumni on Wednesday, the school’s principal and vice principal said that the student would not be punished and would keep his place in the school.

The principal, Tse Yun Ming, lowered his gaze as he absorbed an onslaught of criticism from the former students.

“My emotions are also fluctuating,” he told them at one point.

Students stand outside the Tsuen Wan Public Ho Chuen Yiu Memorial College during a demonstration held to show solidarity with the injured student, on Wednesday.CreditJerome Favre/EPA, via Shutterstock

But Mr. Leung, the city’s former chief executive, criticized the student’s conduct. “Could you not directly denounce his wrongdoing,” he asked in a Facebook post, suggesting that before being shot the student “surrounded and beat the police on the streets in full gear along with other rioters.”

Sit-in protests were expected Wednesday afternoon in at least seven Hong Kong districts, including in Tseun Wan, where the shooting occurred. Tsuen Wan is a working-class district miles from the gleaming skyscrapers of the city’s financial district.