Mandera leaders call for end to clan clashes and divisions

Political leaders from Mandera County, led by Governor Ali Roba, have urged residents to co-exist peacefully for the sake of development in the area.

Speaking over the weekend in Takaba town in Mandera West where they had gathered for a fundraiser in aid of an Islamic Madrasa, the leaders pledged to remain united.

“We are here as a team with a simple message of a united Mandera in everything we are doing so that more development can be realised in our county,” said Mr Roba.

The governor announced that all political leaders regardless of their party affiliations have resolved to work together, further urging locals to follow the trend.

“We have decided to bring our people together through fundraising whereby all communities will be raising funds to assist projects [for] other communities and this will build our relationships,” he said.

Mandera has been experiencing clan clashes for a long time, caused by political differences and competition for grazing fields and water sources for pastoralists.

“We want to bring everybody on board to understand the importance of peaceful-coexistence and as leaders we have started that initiative,” Mr Roba said.

County Assembly Speaker Mohamed Adan Khalif announced that the political cracks among MCAs have since been sealed. 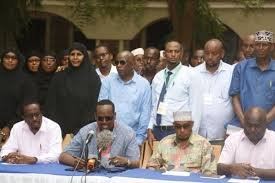 “We are one team at the county assembly and it has been our desire to see Mandera united and residents peacefully coexisting. We want peace to reign in the county,” he said.

Mandera North MP Bashir Abdullahi wondered how a divided Mandera and north eastern at large would be accommodated by other communities or counties.

“We are asking Kitui County and others to let us graze our animals in their areas and yet we cannot allow the same back at home,” he said.

According to the MP, it remains challenging for clans to accept each other in Mandera and within counties in north eastern when it comes to pasture and water for livestock.

“Until we learn how to accommodate each other locally, we cannot achieve anything outside our borders,” he said.