US President Donald Trump is skipping a summit with leaders of the Association of Southeast Asian Nations (ASEAN) for the second year in a row, even as the regional grouping grapples with new economic and security challenges including China’s assertiveness in the disputed South China Sea.

The White House announced on Tuesday that National Security Advisor Robert O’Brien and Commerce Secretary Wilbur Ross would represent Trump at the annual meeting and its related summits in Bangkok on November 3 and 4.

Ross will also represent the United States at the second annual Indo-Pacific Business Forum in the Thai capital, and will lead a trade mission to Thailand, Indonesia and Vietnam.

The White House statement did not say why Trump was skipping the meetings. It also did not say why Secretary of State Mike Pompeo, the top US diplomat, would not be present in Bangkok.

Last year, Trump also missed the ASEAN and Indo-Pacific meetings in Singapore, where he was represented by Vice President Mike Pence.

In his first year in office, Trump attended the ASEAN meeting in Manila, which was hosting the Asia Pacific Economic Cooperation (APEC) forum at the same time.

Trump is expected to attend the APEC Summit in Chile on November 16 and 17.

In contrast, Trump’s predecessor, President Barack Obama attended all the ASEAN meetings during his eight years in office, except in 2013 when he was forced to cancel due to the US government shutdown.

Among the issues expected to dominate the meeting in Bangkok is the ongoing dispute over maritime claims in the South China Sea between several ASEAN member states and China.

For 15 years, the 10-member ASEAN bloc has struggled to reach a deal with China over the issue, leading to several diplomatic skirmishes over disputed islands and territory in the resource-rich waters.

China claims nearly all of the South China Sea, one of the busiest shipping routes in the world, with its controversial nine-dash line. ASEAN members Malaysia, the Philippines, Vietnam, and Brunei, also claim parts of the area, as does Taiwan.

So far, the ASEAN members states and China have failed to agree on a code of conduct that would serve as a guideline for the competing claims, and China has tried to get the group’s members to negotiate the claims on a bilateral basis.

Reuters news agency reported on Tuesday that David Stilwell, the State Department’s assistant secretary for East Asia and the Pacific, would be in Bangkok, but the US delegation would be significantly outranked by other regional players including, China, Japan and India.

Scaling back US presence

Despite declaring Indo-Pacific “the single most consequential region for America’s future” in a Pentagon strategy report this year, the Trump administration has steadily scaled back the US presence at gatherings of Asian leaders. 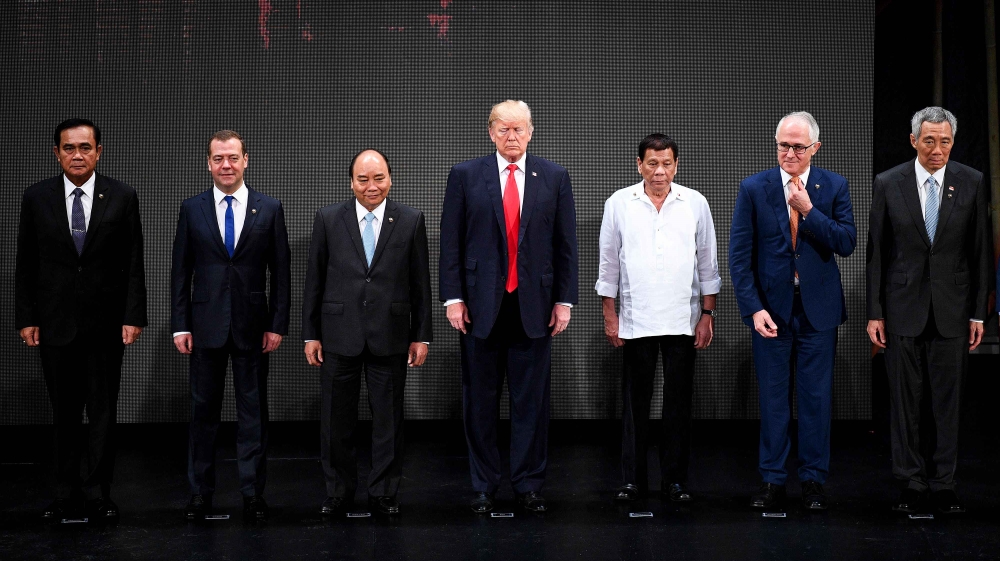 The first and last ASEAN summit Trump attended was in Manila in 2017 [File: Noel Celis/EPA]

Asian diplomats told Reuters agency that the lack of top-level US representation in Bangkok would be a significant, if not unexpected, disappointment in a region increasingly concerned about China’s fast-expanding influence.

Diplomats and analysts said Trump’s absence in Bangkok would raise questions about the US commitment to the region, especially after his withdrawal from the 11-nation Trans Pacific Partnership trade agreement in 2017, shortly after he took office.

“Obviously, without the presence of Mr Trump, the (ASEAN) summit’s profile would not be as high as anticipated,” Kavi Chongkittavorn, a veteran journalist on regional affairs, wrote in the Bangkok Post.

“If the US president continues to miss ASEAN-related summits – including the ASEAN-US Summit – year after year, it will undoubtedly affect America’s standing in the region, which will reduce the perception of Washington’s reliability as a strategic partner.”

“As Woody Allen said, either 80 or 85 percent of life is showing up. And in the Indo-Pacific, that’s definitely true,” he told a news briefing previewing the summits.

“If you show up, you’re given praise, whatever you actually say or do. If you don’t show up, it’s a real problem.”

Amy Searight, who was a senior defence official under Obama and is now a senior adviser at CSIS, said the ASEAN summit had become the premier strategic dialogue forum for the Asia Pacific, drawing leaders from China, India, Japan and South Korea, as well as those of the 10 ASEAN countries.

“It’ll be headlines in the region that no senior American leader is coming to a summit with 17 other leaders from the Indo-Pacific,” she said.