A Burger King tweet has been banned by the advertising watchdog for condoning antisocial behaviour and encouraging political protesters to “milkshake” the Brexit party leader, Nigel Farage.

In May, a day after it emerged that a McDonald’s restaurant in Edinburgh had been asked by police not to sell milkshakes because it was located within 200 metres of where Farage was to hold a rally and protesters might throw them, Burger King tweeted: “Dear people of Scotland. We’re selling milkshakes all weekend. Have fun. Love BK. #justsaying”.

Farage had previously been hit by a milkshake in Newcastle city centre, after a spate of similar incidents against far-right candidates in the European elections campaign, a form of protest known as “milkshaking”. Farage was scheduled to make more public appearances in Scotland following the Burger King tweet. 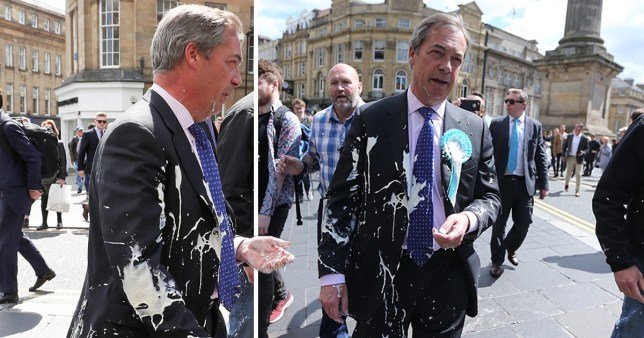 Sign up to the Media Briefing: news for the news-makers.

Authority launched an investigation into whether the tweet broke UK advertising rules and should be banned, after it received 24 complaints that it was irresponsible and offensive because it encouraged violence and antisocial behaviour.

“We considered that the [tweet] was likely to be seen as a reference to the recent incidents of ‘milkshaking’ political figures,” said the ASA. “We considered it would be understood as suggesting that Burger King milkshakes could be used by people to ‘milkshake’ Nigel Farage.”

Burger King UK, which has almost 50,000 Twitter followers, was criticised at the time for inciting violence. It posted a follow-up tweet that said: “We’d never endorse violence – or wasting delicious milkshakes! So enjoy the weekend and please drink responsibly people.”

The burger chain said the tweet was meant to be a “tongue-in-cheek reaction” to recent events where milkshakes had been thrown at political figures. The ASA disagreed and said the tweet broke UK advertising rules governing social responsibility and harm and offence.

“We considered that the ad condoned the previous antisocial behaviour and encouraged further instances,” the ASA said. “We therefore concluded the ad was irresponsible. We told Burger King to ensure that its future marketing communications did not condone or encourage antisocial.